With this miniseries I have going with Get To Know, it’s given me a renewed sense of urgency to try to get some portion of this project revealed and shared with everyone. Instead of being overly ambitious, I’ll truncate the list to a top 25; that’s more than enough to show the kinds of games I adore the most, and the genres that they represent.

What is River City Ransom?

A beat ’em up with RPG elements, River City Ransom was a magnificent NES title that stands the test of time. Alex and Ryan go on an adventure to rescue Ryan’s girlfriend from a local gang head. Milk money, burgers and saunas await players on their journeys with Alex and Ryan, as they make their way to their high school and the final battle with Slick.

What warrants River City Ransom‘s inclusion on this list?

Out of every game on this list, River City Ransom is probably the one that’s purely “dumb fun”. It doesn’t take its self seriously, and you shouldn’t either, and that’s half the fun.

Beneath the silliness is a surprisingly thick layer of depth. At its heart, River City Ransom is a beat ’em up, much like Double Dragon, but with more RPG elements and silliness. You can purchase books that teach you how to perform new attacks, such as rapid fire punches and kicks, throwing your adversary like a javelin, and so on. You can also buy food that not only replenishes your health, but give certain attributes a permanent boost.

Whenever you defeat a gang member, you pick up what I affectionately called their “milk money”, which goes towards paying for the aforementioned skill books and stat food. The further you go in the game, the more milk money the gang members give up, and the more difficult they become as well. 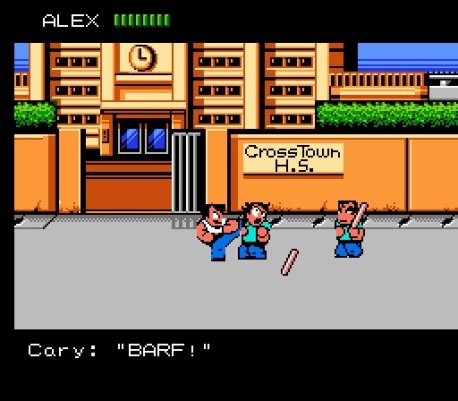 River City Ransom is an extremely short title as well, as it can be beaten in under an hour, if you’re good and know how to maximize your milk money and pick out the right upgrades. Even with its brevity, it never feels as if it either overstays its welcome, or could have used some more content. It’s a pick up and play experience that could, and should, be beaten in one sitting, mostly cause the password system is the most obtuse and wretched I’ve seen in a video game:

Seriously, what the hell?

I’ve spent many weekends during middle school with River City Ransom, clobbering all the gang members in my way, either speedrunning, or trying to buy every single item there is. Its RPG elements do add a nice wrinkle to the beat ’em up genre, and even when compared to such behemoths as Teenage Mutant Ninja Turtles: The Arcade Game, X-Men: The Arcade Game, The Punisher, Aliens vs Predator and so on, it’s always felt like a thoroughly more enjoyable experience. Whenever a friend would come over, we would pop River City Ransom in and have a blast with its co-op, sharing the milk money accumulated as we went along. Countless hours flew by playing it, and every second was thoroughly entertaining.

I had the urge to boot the game back up while putting this list together, but unfortunately it seems as if it was lost from my move a few years ago.* I’ll definitely will go out of my way to reacquire a copy. River City Ransom‘s simplicity in conjunction with its depth is inviting, and if you haven’t had a chance to give it a go, I implore you to put down the milk money to purchase a copy (NES version or a hacked NES classic, not the poor GBA incarnation) and have those gangsters get these hands. IMO It’s one of the most well-rounded NES titles I’ve ever had the pleasure of playing.

Why has no other River City title ever come close to stealing RCR’s lunch money?

While there have been follow ups throughout the years, most notably more recently with River City Underground and River City Tokyo Rumble, neither felt as accommodating as the first. While they had their moments, the unnecessarily difficulty levels of Underground and the dull storyline that halted the gameplay of Tokyo Rumble were huge turnoffs, thwarting any desire to have a Comparison Series written on them.

* In an update, I actually did find my cartridge, though I did lose the booklet and box.