While browsing through Steam, I came across a title that Steam recommended to me, because of my recent purchase of Warhammer 40K: Vermintide 2. It was an Action RPG based on the same universe (one that, frankly, I’m still a complete and total newbie to), called Warhammer 40K: Inquisitor – Martyr.

As of this date, Inquisitor – Martyr is an Early Access (EA) title on Steam, with a release date of May 11th of this year. In a recent post, developer NeocoreGames (The Incredible Adventures of Van Helsing Trilogy) stated that this current build will not be updated until the full version is released. What’s out now shows off what many would expect of a title in alpha/EA – placeholder cutscene art and plenty of bugs that are more than likely ironed out of the final build, but also a taste of what’s to come. 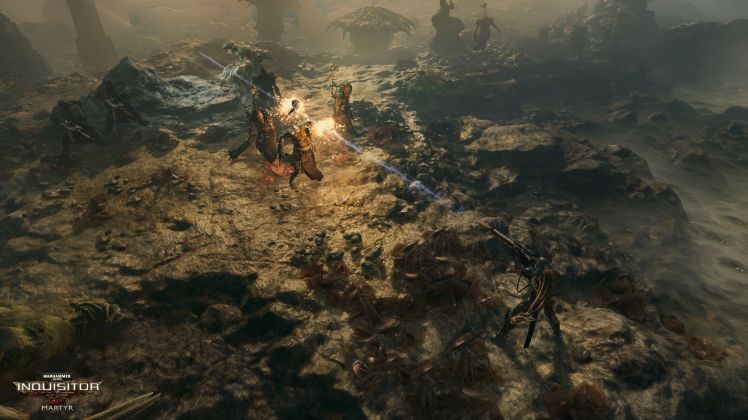 I held off purchasing Inquisitor – Martyr for a few days when I was reading some of the user discussions about the build, worried that I was going to get a crumb of the upcoming feast, however that’s not the case. Yes, it’s a bit rough around the edges, but the content that has been available in this final build before its release is more than enough to keep me occupied, and for the majority of it, satisfied.

I did a near three hour stream over on my Twitch channel of some gameplay just outside the tutorial section. (Feel free to follow me on Twitch as well, as I’ve been streaming a lot more lately!)

But here’s some of what I’ve come away with from my near nine hours of gameplay in total (to reiterate – this is the FINAL ALPHA build, before the full retail build coming in May):

Do I think this will be the one Action RPG that can satisfy me as much as Champions of Norrath did? It’s too early to tell, but from the time I have spent thus far with Warhammer 40K: Inquisitor – Martyr, I can say that even the buggy final alpha build has more than enough to grab my attention, and eagerly anticipate its May 11th release. I can’t wait to try out the other classes, and see what each subclass brings to the table as well.

Check out the nearly three hours of gameplay below, and stay tuned to Galarian Gaming, where I may have more to say about this very promising title coming your way in little over a month: