“Hats Off To Nintendo“

Bowser (once again) kidnaps Princess Peach, this time though, his plan is to marry her. During the opening cinematic, Mario is seen battling Bowser until he bests the plumber from Brooklyn, knocking Mario off his airship, with his signature hat being destroyed. After somehow living through the fall, a ghost with a cap greets him, and finds that they both have a common enemy in Bowser, and a new group of underlings named the Broodal. Together they have been stealing valuable artifacts such as a ring, wedding dress, and so on, and using it for Bowser’s planned marriage to Princess Peach.

Much like Indiana Jones’ fedora always seeming to never leave his grasp, the remnants of Mario’s cap lands near Mario, to which his new ghost friend becomes his new hat for his upcoming adventure. With a hat that literally has a life of its own, Mario gains both new powers, and a new wrinkle in a franchise that seemingly had no where else it could possibly evolve towards previously.

It’s appreciated that we get an actual storyline and motive to Bowser kidnapping Princess Peach this time around, though in all honesty, it’s ultimately an afterthought. That’s not a negative, as the franchise has always been light on exposition. The true star has always been the gameplay, and the new wrinkle Nintendo has thrown in helps unfold some of the most blissful 3D platforming ever.

With the focus being Mario’s cap, series staples such as the fire flower and star power ups, are absent. It didn’t hit me until about a third of the way into the game, mostly because the hat gimmick is so ingenious, so diverse, so brilliant, that I didn’t even miss any of these staples from the last 30+ years.

There are certain enemies and miscellaneous items that Mario can toss his hat towards, which results in him taking over that character or item. Half the charm to Super Mario Odyssey (SMO) is taking control of these creatures and such, but 100% of the brilliance comes with how each are implemented in regards to the world around them. Early on, Mario stumbles across a sleeping Tyrannosaurus Rex, and with a toss of the cap at it, Mario takes over the gargantuan beast, granting him temporary new powers while within its body. Large rock obstructions become obliterated as he charges through them.

A couple of worlds later, Mario can commandeer a small cartoonish tank and use its cannon to blast a wall into dust, opening the path to advancement. One of the later stages has these worms that can extend their bodies, giving Mario a chance to reach out to platforms and moons that he wouldn’t normally be able to.

It’s not just the myriad of characters and such that Mario can become that makes SMO a breath of fresh air to the franchise; each enemy or obstruction he possesses helps get through each stage in a fresh manner. There are even some mini bosses that are fought as some of these hat-wearing toons, and quickly understanding how to beat them with the character you are currently possessing, is one of the most gratifying and just plain awesome moments I’ve ever had with a video game. Creativity oozes from SMO‘s pours in cap fulls. While there may not be a fire flower in the game in the traditional sense, there are fireball spitting koopa troopas you can gain control over at one point. They all have their control quirks (koopa troopas hop instead of walk, goombas have a low regular jump), but all manage to feel just right.

Same thing goes for Mario’s controls in general. Nintendo has made it a point to make Mario control near immaculately with each game. The new moves have their uses, and many old ones return as well. The only strike against the controls, and basically one of the three minor grievances I have with SMO has to do with his patented stomping. Precision for stomps has never been Mario’s strongest suit when transitioning to the 3D realm, with only Super Mario 64 feeling just right with how that works, and it’s no different in SMO.  It’s not excessive, nor is it game breaking. I can do them more often than not on the first try, however it’s never without a hiccup or two here and there.

The creativity doesn’t stop with franchise innovations, as the game world is drop dead gorgeous all around. The vibrant colors of one world become a stark contrast to the cityscape encountered later on, but they are all done with thought, heart and attention to details all around, from either its looks or the layout of the stage its self. Lots of care went into crafting a world that’s brand new, but feels like a Mario game even still. There’s a wealth more detail, and the constant 60 frames per second (minus the one or two hiccups in the 2D plane of all places) brings SMO to life.

Super Mario games have always had some of the most memorable tunes in gaming, at least from the 8 bit to 64. The quality of the compositions, as well as the subtle nods to older titles, makes SMO’s soundtrack one of the best overall in any Nintendo developed title. The night time storming New Donk City track gave me chills, and never once felt like it was a theme for another game. New Donk City and the end game content provide some of the games best and more memorable tunes this game has to offer.

As with Breath of the Wild, there are countless smaller details sprinkled throughout SMO that will bring smiles to players faces. Run around the snow world with Mario in nothing but his boxers, and he will be shivering uncontrollably. Getting blasted by an explosion will cover Mario in soot, which slowly dissipates as he moves forward. Performing 360’s in a rapid succession sends Mario into a ballerina-like spinning tizzy, and then jumping for added height. Little touches are all around, and it adds up to not only the presentation, but in making a lasting impression for a long time to come.

Then there’s just the way that the game makes seamless transitions from the 3D platformer gameplay, to a retro style 2D gameplay, complete with OG Super Mario Bros. sprites and audio. These points in the game happen in an inconsistent frequency, but it keeps players on their toes, shifting the dynamics of gameplay suddenly, but not intrusively. It’s an appreciated throwback that serves mostly as side quest material.

There’s one particularly phenomenal segment in SMO that I do not wish to spoil. All I will say is that it involves New Donk City, and it’s perhaps one of the more unexpected, yet purely brilliant portions to a Mario game that I have ever encountered. Throughout the whole thing, I couldn’t stop smiling, and I know I was not, and will not be the only one.

Once you defeat the final boss (in one of the coolest end boss/end sequences I can recall), there’s more content to pick at. Without giving anything away, there will be more content available, more costumes to obtain; it’s almost like an in game DLC, only without being obnoxious or costing a dime.

Super Mario Odyssey takes what we all knew about the franchise, and turns it on its ear, unveiling new means to explore the game world. Only Nintendo could have come up with something as brilliant and fascinating as they did with having Mario’s hat be the co-star of his adventures. Aside from very minor frustrations with lining up a traditional stomp on Mario’s rogues gallery (which, to be perfectly honest, it felt like Super Mario 64 was the only 3D Mario to get that just right), the lax difficulty compared to the Galaxy series, and a small handful of random game crashes (likely my Switch overheating on dock), there isn’t one thing that Nintendo hasn’t done to a near perfection.

The most gorgeous Mario game to date, with some of the series best music ever, with world and level designs meticulously crafted and the innovation to the series with Mario’s hat playing a monumental role throughout, Super Mario Odyssey is a feather in the cap for Nintendo, and the second system selling title, along side Breath of the Wild. I still don’t know if I’d place it above Super Mario Galaxy 2 as my all-time favorite Mario game and all-time favorite 3D platformer, but it’s on the same exact level right about now.

And that’s nothing to be ashamed of. 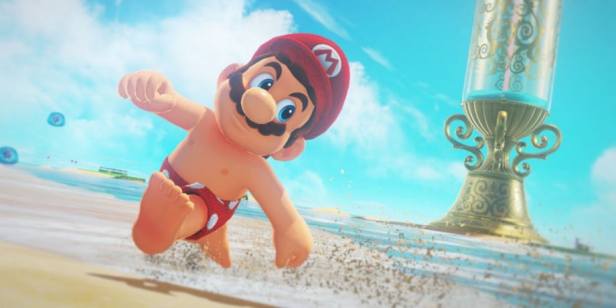