What is Super Mario Odyssey?

Mario’s debut on the latest Nintendo console, Super Mario Odyssey gave players multiple worlds filled with life, creativity and memorable moments. Thanks to the portable nature of the Switch, this was a console quality Mario game players were able to take on the go.

What warrants Super Mario Odyssey‘s inclusion on this list?

2017 gave us several gaming gems that will likely endure the test of time. Super Mario Odyssey was one of them. Being the first traditional 3D Mario title since Super Mario Galaxy 2, it had some Andre the Giant sized shoes to fill. Naturally, Nintendo was up to the task, and created an experience that encompasses everything I love about the Mario franchise, without ever feeling like a retread. 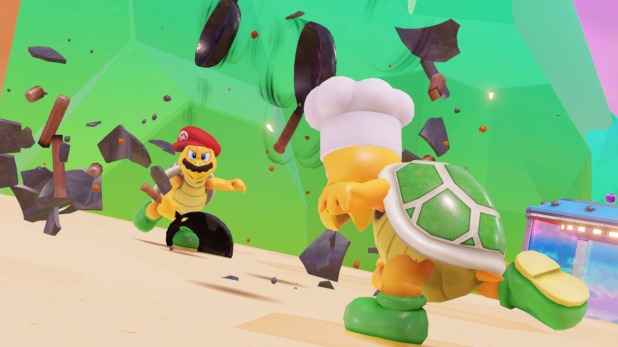 Every 3D Mario gave has worked around an overall gimmick. Whether it was the water backpack contraption from that awful Super Mario Sunshine, or using the wiimote pointer to collect bits in Super Mario Galaxy, there was something that added more than just stomping enemies and dumping around. It took 30+ years, but Nintendo finally incorporated Mario’s hat as a centerpiece to the gameplay experience.

With this gimmick, Nintendo blew open the doors of creativity. Without any traditional power ups throughout the game, Super Mario Odyssey instead focused upon “possessing” anyone or anything that wore his cap. This enables Mario a cornucopia of new powers, skills and ways to complete each stage. Throw your hat onto an orange pylon on the side of the building and flick yourself upward. Place the hat on the sleeping Tyrannosaurus Rex near the beginning of the game and Mario can bust through a wall that’s impeding on his progress. You can even commandeer a remote controlled car to reach a moon. Even through it’s absurd implausibility, it all works, and it significantly enriches the franchise, one where it was hard to find anything left to innovate.

Each area Mario visits has quite a bit of real estate to explore and uncover. They may not be as memorable as Super Mario Bros. 3 (sans New Donk City), but they are fascinating in their own right, with a wealth of hidden goodies to be found. 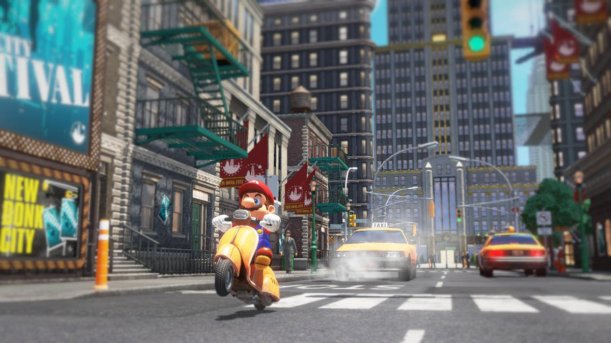 Being able to change Mario’s outfit also added another sense of change to the tired and true formula. By earning coins exclusive to each stage, or by earning the usual coins found in each stage, players can unlock over a dozen different outfits for Mario. But really, after unlocking Boxer Mario, is there any other outfit worth donning?

For more about Super Mario Odyssey, check out the link to my review up above. It’s 2017’s best games, and it left such an impact with me that it’s in my Top 25 Games of All-Time.

Super Mario Odyssey has two of the most memorable moments I’ve ever seen in a video game.

Super Mario Odyssey, as a whole, is one memorable ride, but there’s two moments that stand out as two of my all-time favorite, and most memorable gaming moments ever. The first being the New Donk City portion, where after Mario rescues all of the band members, you get to play this insanely awesome 2D stage with some singing to go along with it. The second is a spoiler, so all I’ll say is “the final 10 minutes of Odyssey“, and those that were fortunate enough to play the game and beat it, will quickly understand.