One of Konami’s lesser talked about franchises (shame!), the first Suikoden was released on the Sony PlayStation in 1995. One of the earliest 32-bit RPG’s, Suikoden didn’t try to wow gamers with polygonal visuals and fancy CGI; it delivered in other areas in such a profound manner, that very few video games were able to even match it.

Suikoden literally came out of no where. No hype, no fanfare, nothing. During a period where it seemed like every developer for the new 32-bit consoles were trying to get their games out there with as much of a spotlight as they could shine upon them, Suikoden quietly went under the radar. It initially didn’t sell well. Most gamers that do mention the franchise, only mention the wonderful sequel, Suikoden 2, and not so much the initial release in the franchise. But this, IMO, is the definition of a “hidden gem”, regardless of how much more notoriety its received the years after its release.

And I guess having a US cover that looked like this, didn’t help its cause any:

Suikoden wasn’t a visually stunning title. The graphics as a whole were geared more towards a 16-bit adventure, rather than a more powerful 32-bit experience. The spell effects were miserable, oftentimes lagging out each battle. Hell, the spells themselves were pretty uninspiring in both look and purpose, for the most part. The controls felt rigid, with no eight way directional run. The menus were slow to navigate, and just an overall sense of clunkiness to anything that involved the directional pad.

Then why in the hell is this number four on the list?

The story, in conjunction with the soundtrack were, and to this day still remain, the greatest that this form of entertainment has ever given me.

The first time I ever played Suikoden was via a Blockbuster rental for the weekend. I had put in 18 hours in the game, and was so profoundly hooked in, that I went out and rented it again the following weekend and completed it. I knew I had to go out and buy a copy for myself though. I went to the local Electronics Boutique (it was either EB or Software Etc.) and procured a copy for myself. It had already left a lasting impression on me, and I knew I wanted to experience it again and again.

You could paint a pretty picture when it comes to graphics, you can be easily accessible with regards to gameplay, but if you don’t have heart, you’re just a soulless experience. The very heart of Suikoden is its storyline and its soundtrack – two of the most brilliant and emotionally charged of its kind, and it enriches the games soul almost like no other.

As the son of a great general, your adventure begins unsuspectingly, and a bit uneventful. Your father takes off for a mission far away, and your caretakers/friends embark on their own adventures, which will intertwine with your father’s travels, corruption in the government, deceit, dismissal, false flags, and so much more.

During your adventures, you can recruit up to 108 members to your party, with a significant portion of them being playable characters, while the others serve as NPC’s that aid in your travels. While it seems like most of the 108 Stars of Destiny would be filler, with no real backstory to follow, it’s….mostly true. Some of these characters have a small backstory to them, like the five blacksmiths, but in the end it doesn’t amount to much when it comes to the overall picture. 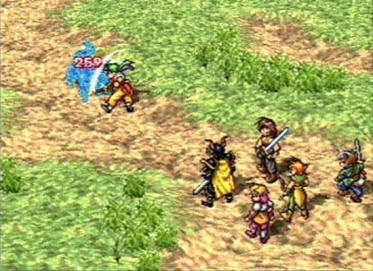 The overarching storyline though, was fascinating and gripping. Konami managed to infuse a life and emotion in the main protagonists, as well as build up the antagonists as the despicable entities that they were. There was emotion with every line of text. While Final Fantasy VI may have had the better cast of characters, the story Suikoden tells throughout its paltry 25 hour quest, left a more profound impact with me than any story has, outside the Mass Effect Trilogy.

There were three moments in the game, two near the middle, the other at the very end, that actually moved me to tears. Each time I played through the game, the same points brought me to tears. Each time. The very first time however, it was a surreal experience; last time I had tears in my eyes while playing a game was when my local Nobody Beat’s The Wiz electronics store got an N64 kiosk with Super Mario 64 being demoed, and the realization of playing Mario in a third dimension, moved me deeply. 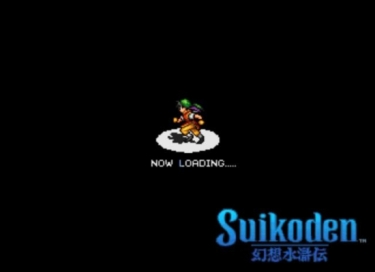 This was different though. Watching these three moments actually hit me hard, to the point where there were tears falling. It was an emotional attachment to the story and the characters that I had never developed before. The closing moments are etched into my memory; even though I have not played through Suikoden in over five years, I can still feel a lump in my throat when I think about the final scene and the dialog that was exchanged.

What helped reinforce the feelings that Suikoden‘s story gave me, was an absolutely masterful soundtrack. This right here, still remains the single best video game soundtrack I’ve ever had the pleasure of listening to. It’s enduring, with some tracks that I’d listen to leisurely, and smile as it elicited fond memories of my journey through Suikoden, while hitting me in the feels with some other tracks.

Take a listen to a couple of these beautiful songs, from the more simpler tracks, yet filled with life and emotion:

….to the theme of sadness (the tear jerker) that plays during vital points in which some emotional moments are revealed:

….to one of, maybe even the best closing themes in a video game, which gives off a range of emotions throughout (I get the most wicked chills listening to this):

The soundtrack, from top to bottom, elicits a powerful emotional response on its own, but in conjunction with some pivotal moments from the game? It’s some of the most profound moments I’ve ever experienced with a video game. Some may be moved to tears from a movie or television show, so why not a video game as well? With as much of an emotional investment that I had with the story, with how well it was told, I don’t think I, or anyone, should be ashamed to admit that a video game moved them to tears. I don’t even think I can count on one hand the number of games that have moved me so. While I’ve ran into stories, games and franchises that I consider powerful (Mass Effect trilogy, Persona 5, Final Fantasy VI), none wield that power in such a masterful and graceful manner like Suikoden did. It taught me that “yeah, it’s okay to cry during an emotional moment in a video game.”

When I was in high school, I used to use my VCR to record gameplay footage at home, for not just myself, but to watch with friends during lunch breaks. Usually it ranged from me scoring 100+ points as the Indianapolis Colts in Madden NFL 98, to random gameplay from Resident Evil and PaRappa the Rapper. I’m not sure if I still have it, but I remember many years ago, I used my VCR to record every storyline segment (and I believe boss battle) and make one whole long rewatchable segment of Suikoden‘s story. In that recording, I gave enough time for a majority of folks who can read at a decent pace, to be able to read through it before the next line of dialog. If I ever find it, I may try to upload it on YouTube. I can recall watching said VHS recording multiple times in its entirety to pass a summer weekend day, when I didn’t want to go actually play through it at that moment.

Most gamers still sleep on Suikoden. They’ll visit the second title, one that’s widely considered one of the all-time greatest of its genre, and never try the first. It’s a story and an experience that flat out bests just about every RPG. It may never win a beauty contest; it may have poor controls in game and in menus; it may have one of the worst box arts in the 32-bit era; but Suikoden‘s successes are where it’s most important for the genre – its story. It also helps that the soundtrack seemed custom tailored for each situation that arose, giving the journey that much more mileage.

If there’s any one game on this Top 25 Games of All-Time that I put above any other in regards to being a “must play”, it is Suikoden. Why? Because it’s likely that you’ve never played it. Who hasn’t played Grand Theft Auto: San Andreas, Super Mario Bros. 3, Super Metroid, The Legend of Zelda: Ocarina of Time, and so on? These are all blockbuster titles that have retained a fanfare from day one, that will endure through the end of time. Suikoden was almost always passed over for its sequel, and is almost never given the time of day.

And that is the biggest crime in gaming. If you want a short RPG that you will feel emotionally invested in, with a soundtrack that so eloquently accentuates the mood, please, I implore you to give Suikoden a try. This is the hidden gem of all hidden gems, and it’s an emotional rollercoaster ride that you will never, ever forget.

An 18 year reign that ended.

From the first time I completed the game, right on up til 2017, Suikoden was, in fact, my all-time favorite game. I’m sure you can see exactly how and why it would be. It wasn’t until early 2017 where I started feeling that, the number three title in this list, was a more important, more impactful game. And it was….and then I sat down and started thinking really hard about a couple of other games, and their influences and impacts they’ve made in my life, and number three soon became superseded. Nonetheless, the memories Suikoden left, and how it emotionally moved me (and continues to, even 18 years later) will always mean the world to me.