14 – The Legend of Zelda: Ocarina of Time

What is The Legend of Zelda Ocarina of Time?

The Legend of Zelda: Ocarina of Time is Link’s first foray into a 3D world. Jaw dropping visuals for its time, expansive dungeons and overworld, memorable boss battles and so on, are just a few highlights of one of the greatest Nintendo first party titles ever.

What warrants The Legend of Zelda: Ocarina of Time‘s inclusion on this list?

There’s likely an unwritten rule that states “any all-time favorite games list over 25 games needs to include Ocarina of Time“. But seriously, this game does almost everything right, and next to nothing wrong. 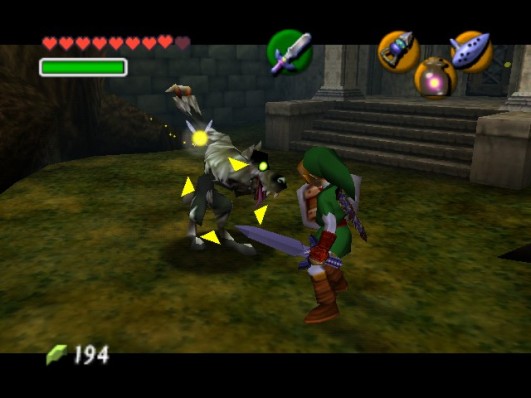 After the vile, inhumane titles released on the CD-i (Zelda: Wand of Gamelon, Link: The Faces of Evil and Zelda’s Adventure), the franchise was in desperate need of something to redeem its self (and no, the three titles mentioned were not developed by Nintendo, but still). The first 3D Zelda title, Ocarina of Time, not only erased all memory of the CD-i atrocities, but quickly became what many felt was the greatest game they’ve ever played.

It’s next to impossible to argue the impact Ocarina of Time left on the industry and gamers alike. The scope was like nothing before it, sans RPG’s. Hyrule Field was a pleasure to run through, especially at night, when stalfos would pop out of the ground. Honestly, every area, dungeons included, was a joy to run through and discover.

That’s one of the biggest draws for me – the sense of discovery. While the four previous games before it (the actual Nintendo developed titles) shared that sense of adventure and discovery, being in a 3D world, a large one at that, magnifies the feeling tenfold. It was as close to a dream game that ever came out at that time, aside from Super Mario 64.

Each dungeon was surreal. The size, depth and ingenuity of them were far beyond just about any game from any genre. It retained the Zelda dungeon feel from the previous games, but the doors were blown wide open with them being in a 3D world.

Ocarina of Time‘s audio was striking, between proper, impactful sound effects and the memorable soundtrack that played throughout. Hyrule Field’s theme remains one of the best musical compositions in gaming. Even with Navi being that annoying gnat, always wanting you to “listen”, there’s no denying the audio was such an important piece of Ocarina of Time‘s success.

I remember way back in the days, when I wrote for GameSages, an eventual affiliate of IGN (and then outright purchased by them), I wrote what I can say was an embarrassing and newbish review of The Legend of Zelda: Ocarina of Time. The most important (and coherent) information can be found in the final paragraph, where I labeled it as “history making”, and it was just that. You can only get one chance at making a debut in the third dimension, and Nintendo hit and inside-the-park grand slam.

Ocarina of Time was, and remains, a very special video game, one that’s had a unanimous praise like almost no other game before it, or since. It’s one of an incredibly small handful of titles that I ever called my all-time favorite game. While it’s been superseded, it will always remain in my Top 25 Games of All-Time, and one of three video game related tattoos I’ve had done.

The age old debate: Is a Link to the Past or Ocarina of Time the better game?

Both of these games are bar none two of the most memorable and enjoyable experiences throughout gaming. I always hear people go back and forth on one over the other, and I accept and agree with just about each point for each game. Which do I feel is truly the better Zelda game? Neither; that one is coming up soon!