Console, PC or handheld specs; none of these matter when it comes to crafting a memorable gaming experience. For the console world, there’s no better example than the Nintendo Wii U’s swansong and Nintendo Switch’s debut title, The Legend of Zelda: Breath of the Wild. Nintendo, who’s no stranger to creating some of the greatest games ever, more or less magically picked my brain and extracted nearly every single wish list I had for a new Zelda adventure – a gigantic world where players can scale treetops and such, voice acting, and the littlest of details that are peppered throughout the game world.

Breath of the Wild is all of this, and by some voodoo magic, so much more. 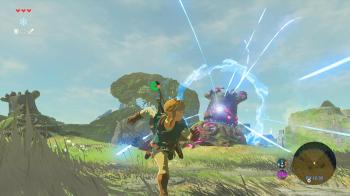 For me, what separates a stellar game with one that transcends nearly every game before it, is whether or not you have to stop and pause to let the moment sink in. The first twenty hours of Breath of the Wild (BotW) were filled with moments in what seemed like every five minutes, where I had to pause the game and slow it down, because all of the elements of BotW were just so nearly immaculate, that I wondered whether I was dreaming or not.

Stepping into BotW is an almost overwhelming experience. It begins without very much direction, as if it was channeling its roots with the debut title on the NES. You loosely know what to do next, but stepping out into the game world for the first time, and the scope and gravity of the world around you becomes apparent. This is not the Zelda game you’ve been accustomed to.

Once the first few Shrines are completed (Shrines being mini “dungeons” that are more puzzle oriented in its execution than anything), the game world is almost totally opened up. With the exceptions to the areas with extreme heat and cold, Link can travel around and discover what seems like an endless number of places and spaces. The game world of BotW rivals Grand Theft Auto: San Andreas as the greatest and most fascinating game world ever created in a video game. 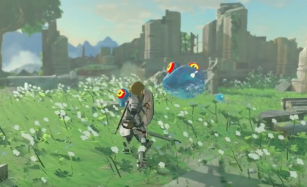 The only “drawback” to this open world, and perhaps one of the two “drawbacks” to this experience, is that there can be stretches of land where there’s no moblin in sight; no stalfos to take arms up against. But when you take a long hard look at every area traveled, there’s a wonder and spectacle to behold. Many times it’s just the gorgeous landscapes, occasionally it’s the discovery of a hidden goody; whatever the case may be, there is never – ever, a dull moment traversing the lands of BotW.

Discovery never ceases to be an intricate part of the BotW experience. Realizing that you can sneak up onto the treetops to get a stealthy advantage against some random enemies in your path, becomes one of the most surreal experiences gaming has ever provided. In fact, tactical and stealthy approaches can benefit most encounters, more often than not. Whether it’s a stealthy sneak behind an enemy to attempt a one hit kill, or just being perched on the treetops, aiming your bow and arrow at an explosive barrel that the moblins are dancing around, there’s a level of creative freedom and ingenuity that is peppered throughout the game.

Speaking of bows and arrows, the second “drawback” to BotW is weapon durability. Each weapon and shield has a certain amount of damage it can unleash or absorb. They shatter when there’s no durability left. Luckily there’s a plethora of weapons and shields players cam obtain, but that doesn’t lessen the blow of losing a pretty powerful weapon, or a slick wand that shot fireballs. It’s extremely rare to be without a weapon for very long though, plus the Master Sword exists, although it has its own quirks, with it needing to “recharge” after extensive use. Both the weapon durability and stretches of monster-free area are not enough to sour my taste buds on this sugary sweet title.

Have I mentioned how visually brilliant BotW is? Cause man, it’s easily one of the prettiest art styles and game worlds I have ever encountered. Everything about the graphics screams “gorgeous”. Every small detail looks that much more impressive. Every weapon has its own distinct look. Even the Shrine interiors, which have a samey feel throughout the 100+ of them, are sights to behold. Easily the best looking Wii U game, and its style and attention to the little details rivals current gen consoles and games to a degree.

The audio can be an anomaly sometimes; music won’t be heard often, but when it is heard, it’s a thing of beauty. Even the little jingles are eloquent and full of personality. The effects and grunts are all fitting as well, further bringing life to this wondrous experience.

As one of a small number of Zelda fans that thoroughly enjoyed the motion controlled combat of Skyward Sword (and questioned how poor of a gamer you had to be to not have been able to utilize such a straightforward mechanic setup), I was disappointed to see that aspect of the franchise be retired. However, Link still controls superbly. The stamina wheel returns, and it lends its self to both running and climbing, making both feel more natural with its limitations. Link can upgrade the size of his stamina wheel as well; the same piece that helps increase that wheel can also be used for an extra heart container. Combat is as fluid as ever, even with different classes of weapons (sword and board, two hander, wands, etc) having their own methods of attacking.

One of the highly commendable aspects to BotW that has nothing to do with its audio, video or controls, is the enemy AI. There’s a level of tactical approach to each encounter that the franchise has never seen prior. Some may dash backwards when a weapon is swung towards them, making timed strikes more important than ever before. This is another reason why a stealthy approach is such a benefit to the gameplay.

Furthermore, many gamers have made the comparisons to Dark Souls in regards to BotW‘s incredibly high difficulty. Nintendo wasn’t playing around this go; it’s not uncommon to die in 1-3 hits early on, no matter how many heart containers Link has, or the amount of armor mitigating the blows. Luckily though, Link has been taking cooking classes and is able to cook up some specialty foods that can either heal him, provide a speed boost, make him more stealthy, grant fire resistance, and so on. Ingredients are readily available all around the game world, and these replace hearts as the health replenishment of the game.

The main story, complete with (finally) voiced over story segments, is one that you’ll end up caring about in the end, though the game world spoils players so much that detours will constantly be made between story segments. Taking on the Divine Beasts, giant mechanical creatures that double as the games four main “dungeons”, tests players puzzle solving skills even further than the aforementioned Shrines. Each Divine Beast holds a boss and defeating them helps breaks down the barrier to rescue Princess Zelda in the heavily fortified castle.

No matter what is going on, the bigger picture is the most relevant part of the experience of BotW – and the bigger picture is the sense of awe and discovery that’s constantly occurring. Finding a new weapon, discovering the right path through the Lost Woods, shield surfing down a hill, there’s an innumerable amount of moments and areas of discovery that constantly streams through. Discovering that you can dance around in circles with a dog and he’ll do the same, is such a random occurrence that many never would have thought would exist, but it does. Having to unequip any metal items when a thunderstorm pops up in case of an errant lightning strike, was a stroke of genius.

It can be overwhelming, but in a positive manner. Never have I encountered a game with this many hidden goodies and breathtaking moments that put a genuine smile on my face. Never have I been tested in gameplay in a way that makes sense, and never felt cheated. BotW literally does next to everything right, and is one of the rare occasions where it’s as close to flawless as I have experienced.

And that’s exactly why The Legend of Zelda: Breath of the Wild is a colossal success. It goes beyond just the visual beauty and the scope of the world. It supersedes the brilliance of the new wrinkles folded into the franchise. It eclipses the shining audio production.

It makes me stop to soak in the experience. It has me think about my travels long after I powered my Wii U off. It elicits emotions from me that only an extremely small handful of games manages to evoke from me.

Breath of the Wild is magic on a DVD; the kind of experience that happens once a generation.

It’s the reason why I am a gamer.

2 thoughts on “Review: The Legend of Zelda: Breath of the Wild (WiiU)”