What is Star Wars: Knights of the Old Republic?

A Star Wars game in a genre that I’m surprised no one attempted to put the franchise in sooner, Knights of the Old Republic was a game with an infinitely more enjoyable plot and character development than the prequel trilogy. Follow the protagonists as they tried to stop Darth Malak, all the while some explosive story developments are dropped in the middle of it all.

What warrants Star Wars: Knights of the Old Republic‘s inclusion on this list?

It blows my mind how it took til 2003 for anyone to release a Star Wars RPG. Granted, the technology previous to the Xbox may not have been suitable to birth a concept like that, but even still, I would have thought the PlayStation would have had one. When the franchise finally appeared in an RPG setting with Star Wars: Knights of the Old Republic, it gave the franchise a new dimension of sorts, and a whole lot more love and respect.

I remember purchasing a refurbished Xbox console from my old job with the sole reason being to own and play Knights of the Old Republic. It may have been the first of two instances where I outright purchased a console to play one specific game (the other time being a Wii U for The Legend of Zelda: Breath of the Wild). It was, at that time, an expensive endeavor, but one that paid off a million times over.

Bioware nailed everything it needed to in order for the game to work. The soundtrack was masterfully crafted, giving its own unique identity to a new storyline that hadn’t been explored previously. It introduced new characters to the Star Wars lore, and opened up on a past rarely discussed in Star Wars gaming before it. The gameplay was closer to a CRPG, with player triggered pauses to give commands to their teammates. Visually it was unlike any Star Wars title before it, with large, open areas of the game world to explore, and countless NPC’s to interact with.

Then there was that one devious plot twist in the middle of it all, that threw my perception of the protagonists into a tizzy. It remains one of those gaming moments where the storyline literally made my jaw drop to the floor in surprise and wonder.

Having never played an RPG like Knights of the Old Republic before, I wasn’t deterred by what seemed like such an unorthodox manner to play the genre. It took a little bit to get the hang of it, and once I did, it made my experience with the game that much more meaningful. It was a level of tactical thinking that I never really encountered previously, at least not in that fashion. In hindsight, I don’t think anyone could have made a Star Wars RPG work without such a gameplay system as what we got here. The scope was massive for its time as well, with large areas to explore on multiple planets, and none of this would have worked out on any console generation before the Xbox.

You can’t talk about Knights of the Old Republic without mention of its cast of characters. From Carth, to the sass talking HK-47, the cast of characters are a mix and range of everything one would expect from an RPG full of quality protagonists. The voice acting helped further flesh them out as believable pieces to the Star Wars universe. 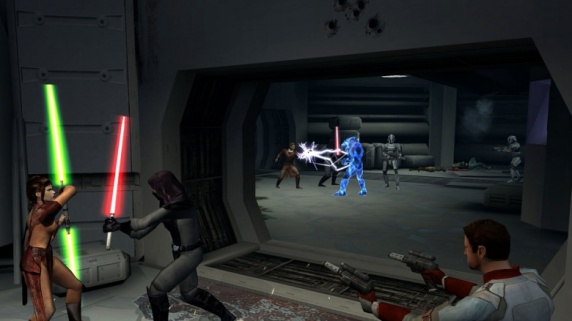 While I do think Star Wars: Knights of the Old Republic is one of the greatest RPG’s ever made, I never really got a chance to fully play through the sequel, The Sith Lords. I’ve heard a lot of good and bad with it, and I got 30+ hours into it before my time and attention was diverted. But even with what time I put in (which I actually did enjoy every second of what I played), it still didn’t come close to toppling the juggernaut known as Knights of the Old Republic. I’m also thankful that, thanks to the success and experience working with Knights of the Old Republic, Bioware later came out with their own sci-fi franchise that meant the world to me – Mass Effect.

I don’t have access to my Xbox controller ATM, so I can’t go back and give a better description. Just around or after the middle of the game, I went back into the Ebon Hawk, and there was some robot there at the navigation window, offering to visit planets I hadn’t been to previously, including a way to reach the final portion of the game. I tried doing a quick Google search, and came up with nothing. I swear I recall reading about how that’s a bug or something, but I cannot, for the life of me, find this, or any information on it. Now I need to find my Xbox controller so I can take a look and see if I still have that save file available, or if I was just smoking crack. Do any of you know what I am referring to?