As a gamer, you know what I absolutely abhor? A phenomenal title, or even a franchise, that doesn’t get the support it deserves by way of brand new installments. Sometimes they were created as a one-off, but then other times, you can just tell that they were almost intentionally forgotten. While the game existing is a positive, never tapping upon its expansion is maddening. Sometimes it’s out of everyone’s hand to develop a follow up, due to licensing and other issues.

Nonetheless, these are five games/franchises that deserve a follow up, an HD remake or some kind of way to revive them from the depths of obscurity. Not only are these games I feel would flourish with a new installment, but are some of my all-time favorite games/franchises. If you know of any other franchises that deserve a resurrection, please share them in the comments section below!

StarTropics is definitely one of those games that many old school gamers will remember from the 8 bit days. A game with a similar dungeon vibe as The Legend of Zelda, StarTropics had grid based movement with some awkwardness to its controls early on. Once that’s conquered, the game shined with enjoyable dungeon romps, with its charming sub weapons and wacked out storyline progression.

Unfortunately, StarTropics was a US developed first party title, so a reason why we haven’t seen such a push for a new installment outside its mediocre sequel is the lack of Japanese influence in making it happen. It’s a damn shame too, as StarTropics is one of my most beloved 8 bit titles. The Nintendo Wii would have been the perfect platform to resurrect this franchise; motion controls with the Wiimote could act as the means of using Mike’s weapon, the fearsome yo-yo.

Even two consoles removed from the Wii, there’s more than enough reason to bring this relic from the past back to the Switch. A third person hack and slash wouldn’t be awfully innovative, but it could be a natural evolution of the franchise, with the charm the franchise is known for. Have it be a new standalone installment, or even a re-imagining of the original. As much as I hope and dream for a new installment of StarTropics, it’s as if Nintendo themselves have all but forgotten Mike Jones’ adventures. 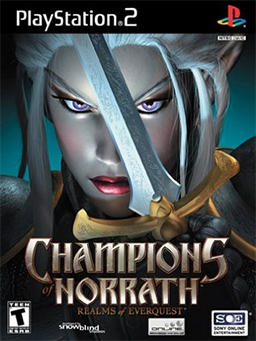 Action RPG’s are a weakness for me; moreover, any game that has a plethora of loot that’s constantly being upgraded through mob drops, hooks me in for the long haul. Whether it’s the likes of Borderlands 2, or the incredibly underappreciated Champions of Norrath, the gameplay and the loot is so addicting.

Based upon one of MMORPG’s granddaddies EverQuest, Champions of Norrath was a PS2 action RPG build upon the Baldurs Gate Dark Alliance game engine, with several classes to choose from and bajillions of pieces of gear to obtain, with many of the endgame pieces named after vanilla Everquest items, such as the Blood Fire. Combine all that with online play, and Champions of Norrath was one of the premiere titles on the PlayStation 2. Its sequel, while competent and enjoyable, didn’t have the same impact as the original.

With the EverQuest franchise in the hands of Daybreak Games, with a much smaller bankroll than Sony Online Entertainment, it’s  likely we will never see a follow up with that much love and care, to this magnificent title. With the PC action RPG’s coming out strong, such as Path of Exile and Grim Dawn, there is that updated source of the loot grab action RPG, but the gameplay, items and character advancements, and the universe of EverQuest helped give Champions of Norrath more of an identity to me. Experiences like these don’t exist anymore, and it’s a damn shame.

A more light-hearted approach to the genre, FFTA felt like a much more simplified and streamlined experience when compared to the PlayStation version. The myriad of classes, the side quests and everything about FFTA had me hooked for over 128 hours on my Game Boy Advance. Then when the sequel came out for the DS, I doubled my playtime, and was hopelessly addicted.

With the different directions Square Enix have gone with the franchise, I can’t see them tapping back to the Tactics Advance well anytime soon, if ever again. They could easily strike gold with a 3DS incarnation of the franchise, but they seem too busy with mobile games, multiple Final Fantasy XV spinoffs and DLC (which, btw, I adore FFXV). Disgaea has managed to scratch my itch for the genre, but it hasn’t replicated my adoration for the Final Fantasy Tactics Advance franchise. Sure, I barely have time to play video games leisurely anymore (especially  ones with 100+ hours to them), but you best believe I’d make the time for a Tactics Advance 3(DS?)

The success of the Mario sports line of titles is quite surprising. The tennis and golf installments always manage to have a good bit of success, though the baseball and basketball line up have been a disaster. Soccer wise, I’ve felt that the Strikers franchise has been grossly underrated. As a single player game, they are actually replayable and entertaining, but as a multiplayer game, they are some of the greatest ever.

The five-on-five gameplay is aided by random power ups that can be obtained, as well as some crazy and powerful kicks. Curving your shots was a fine art that was difficult to master, but proved effective in trying to hook shots around defenders and the goalie. The Nintendo Wii sequel didn’t fully capture the magic of its predecessor, but was an excellent multiplayer game in its own right, one with online play.

If Nintendo can go back to golf and tennis more often than not, they should go back to soccer and release a new title on either the Switch or the 3DS. The former would benefit from at home or portable play, while the latter could have some snazzy 3D effects.  There’s a lot that can be done with a sequel, from new power ups to new team captains, to new skill shots, and so on. Out of all the games listed here, the Super Mario Strikers franchise is the most likely to see a new installment, yet I just don’t see Nintendo kicking that idea around. It would definitely be a worthwhile addition to their newer online system, and flourish more than Mario Strikers Charged ever did on the Wii.

(Just for posterity, I am aware of Mario Sports Superstars, however it is not a true follow up to this franchise, especially given the fact that the gameplay seems drastically different. I’m working on acquiring a copy for myself, but from everything I have seen gameplay wise, this isn’t the sequel I’ve been looking for.)

One of the most cherished fighting games to have ever come out, was a collaborative effort between Capcom and SNK. Mark of the Millennium 2001 was packed to the brim with fighters, multiple fighting styles and more.

The collaboration saw two titles from Capcom, and one from SNK which, the less said about it, the better. Seeing two mega fighting game franchises battle it out was a surreal thing back in the late 90’s/early 2000’s, something that has become more of an occurrence (Street Fighter X Tekken, Tekken 7 with Capcom’s Akuma and SNK’s Geese Howard). All these years later, Capcom vs SNK 2 is still addicting and can still suck away hours upon hours of your time in the blink of an eye.

With Capcom focused on Street Fighter V and its Capcom Pro Tour series, as well as the release of Marvel vs Capcom Infinite, it seems less and less likely there will be any time in-between this madness to provide fans with another installment of the franchise. A part of me wonders if having the art style in the similar polygonal models as Street Fighter V would translate well visually. If there ever was a Capcom vs SNK 3, there’s no chance it will dip back to 2D sprite work, especially since both companies have move long past this. Honestly, they could look like black and white paper cut outs; I just want another Capcom vs SNK game!